I woke up at 5:00AM the day I was going to tee it at Medinah (with a 2:00PM tee time). To say I was excited was an understatement. My excitement for Medinah started a couple months before I played, when the tee-time got lined up with a very gracious member of whom I was introduced. As you can imagine, I spent too much time researching the holes of the #3 course, and watching replay footage of some of the famous shots to take place on the golf course.  I couldn’t wait to tee it on the Rees Jones redesign of the Tom Bendelow original #3 course.  On top of it all, a good buddy of mine who happens to be my annual Member-Guest partner was able to make the trip with me, it was going to be a good day.

The day started out with a stop at the casino in New Buffalo, MI, the Four Winds. My buddy and I met at the bar to have a “cran” (slang for Tito’s and cranberry) and start talking about the day ahead. We were way ahead of schedule so killing a little time at the bar couldn’t hurt. Luck was on our side that day, as my friend inserted a $10 into the video poker machine at the bar and hit for $130 on his first $.50 cent bet… he happily paid for my drinks.

We arrived at Medinah just before 1:00PM. What had been a beautiful sunny day thus far had turned dark very quick. As soon as we hopped off the highway and as we were pulling into the country club, the sky went very dark and it looked as if the heavens were about to open up. The forecast now showed a 100% chance of rain, the question was “how long” was it going to last. Neither of us packed any rain gear as the forecast showed NO rain whatsoever, so we were going to tough this out!

We arrived and were greeted by the valet attendant who ushered us to the men’s locker room. I’ve never stepped inside any locker room that had more buzz than that of Medinah. This place was nuts. First of all it is HUGE. It’s a massive locker room with hundreds upon hundreds of lockers, common areas, shower/steam facilities, etc. I spotted probably a half dozen attendants on staff.  We were greeted by Eladio, our locker room attendant, who promptly had two fresh “crans” in our hands. Our guest lockers were donned with banners welcoming us.

We sat in the lounge adjacent to the locker room and enjoyed lunch as our member arrived. They had a pretty decent spread available! Although the taco bar looked amazing, it was recommended that we try the burger, which didn’t disappoint.

After lacing up, we made our way to the practice facility to hit some balls. That’s when the rain started. It wasn’t much, maybe a light drizzle at most. We were determined to get this round in however. No turning back.

We teed off on the first hole, a straight away par 4, and I was thrilled to put one down the fairway and in play with my opening drive. What I did with it after that however was disappointing, and I walked away with a bogey on the first.

The second hole is the first of many iconic par 3’s that are hit over the lake at Medinah.  It’s an all carry shot, about 172 from the silver tees typically into the wind.  I was happy to make it over safely.  After the benign first hole, the second introduces you to the length and challenge that is Medinah #3, and it is awesome.

We made it through 7 holes when the rain started pouring and the horn blew shortly thereafter.  The sky was black, it was coming down in sheets and the storm looked pretty intense.  We ended up hanging out in the memorable halfway house with a ton of other golfers, watching it pour outside.  I will say that the snacks in there were awesome, especially the cracker station where you can make mini PB&J sandwiches on a cracker. 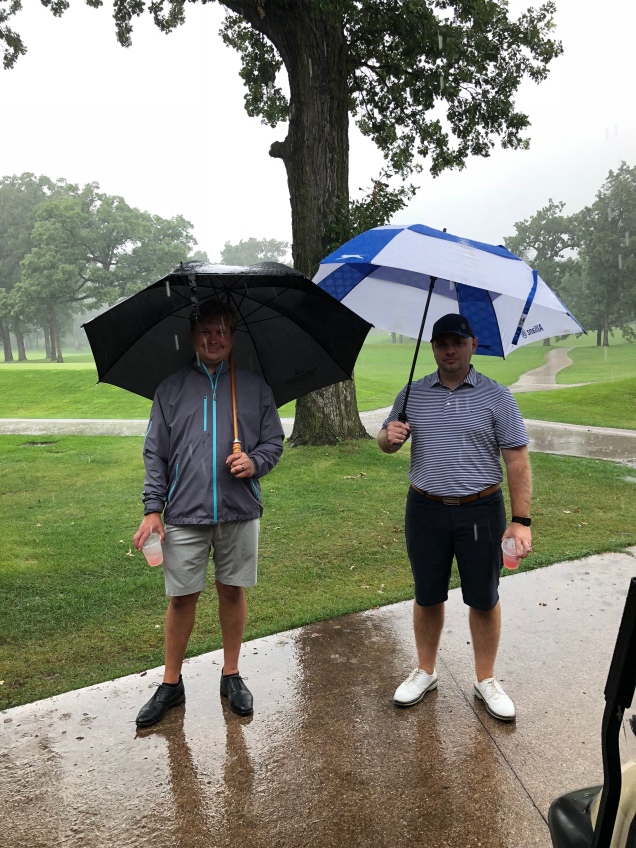 About an hour and a half later, the place was pretty cleared out as many went home because the forecast was so bad.  We were just waiting for the bad news that we wouldn’t be able to go back out.  Finally, we were told that we could proceed on foot if we wanted to finish.  No question.  We started with carts, and finished with a caddy, the way golf should be played!  It was still raining pretty good but WE WERE AT MEDINAH!  On we went.

#13 is the next par 3 that really stands out, as you play back across the lake again.  I really thought the bunkering was exceptional at Medinah, especially on the par 3’s. 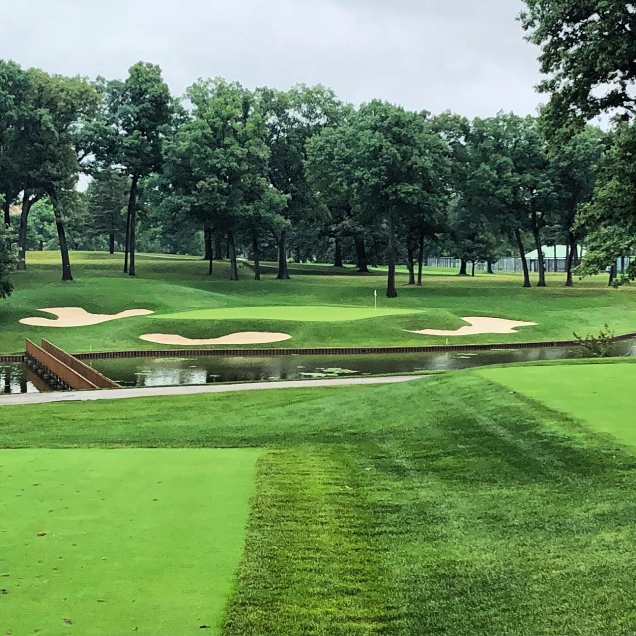 The par 3’s really stand out at Medinah, and they are so fun to play, but my favorite and most memorable hole is actually number #15 par 4 with a challenging collection area that funnels down from the right side of the green to the water.  You will see how close this comes into play with where the pin was the day that we played. 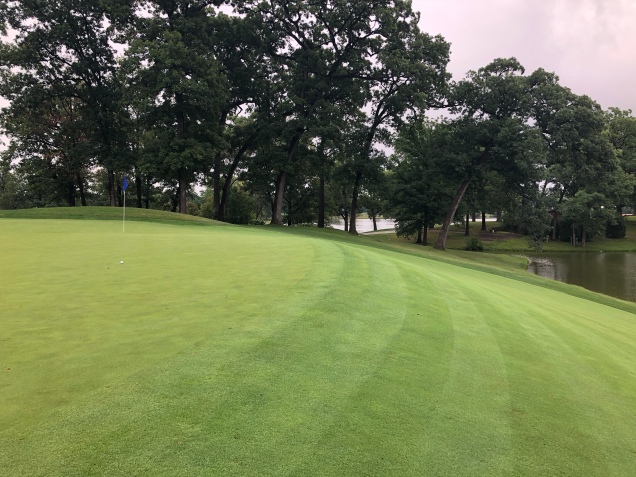 #17 was another fun par 3 to play, with of course another all-water carry to a bunkered green.  This in my opinion was the easiest of the “water” par 3’s.  It was sad to walk off of this green, because we knew the round was nearly over. 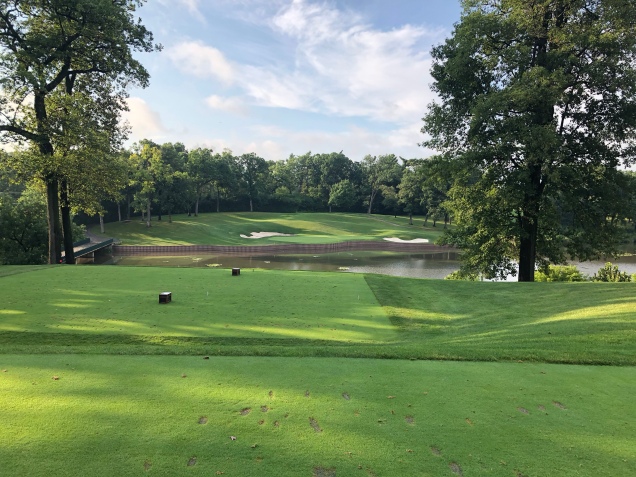 We finished up the day, tipped our caddy, and went to the pro shop to buy some memorabilia.  Unfortunately, because of our late start and long delay, it was already closed so we went empty handed.  I may have made up for it by grabbing a handful of matchbooks in the locker room before we departed.

The night was capped off with my good friend eating bone-in filets at Gibson’s and drinking a great bottle of Cabernet.  I can’t wait for my invite back, the idea of playing Medinah #3 on a sunny day is at the top of my list!